Worth a Dozen Men: Women and Nursing in the Civil War South Libra R. Hilde 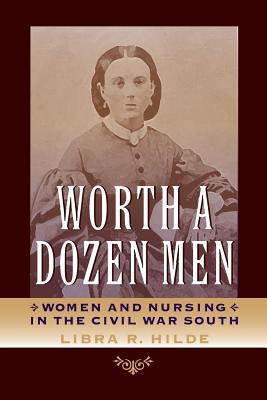 However, they were expected to exercise their talents only in the home- nursing strange men in hospitals was considered inappropriate, if not indecent. Nevertheless, in defiance of tradition, Confederate women set up hospitals early in the Civil War and organized volunteers to care for the increasing number of sick and wounded soldiers. As a fledgling government engaged in a long and bloody war, the Confederacy relied on this female labor, which prompted a new understanding of womens place in public life and a shift in gender roles.

Challenging the assumption that Southern womens contributions to the war effort were less systematic and organized than those of Union women, Worth a Dozen Men looks at the Civil War as a watershed moment for Southern women. Female nurses in the South played a critical role in raising army and civilian morale and reducing mortality rates, thus allowing the South to continue fighting. They embodied a new model of heroic energy and nationalism, and came to be seen as the female equivalent of soldiers.

Moreover, nursing provided them with a foundation for pro-Confederate political activity, both during and after the war, when gender roles and race relations underwent dramatic changes. Worth a Dozen Men chronicles the Southern wartime nursing experience, tracking the course of the conflict from the initial burst of Confederate nationalism to the shock and sorrow of losing the war.

Through newspapers and official records, as well as letters, diaries, and memoirs-not only those of the remarkable and dedicated women who participated, but also of the doctors with whom they served, their soldier patients, and the patients families-a comprehensive picture of what it was like to be a nurse in the South during the Civil War emerges.

Comments
Comments for "Worth a Dozen Men: Women and Nursing in the Civil War South":